Accepting Free Content during the COVID-19 Pandemic: An Assessment

Citation Patterns in Chemistry Dissertations at a Mid-sized University: An Internal Citation Analysis and External Comparison

Logitech for Education is targeting some of their tools specifically for schools. Three that I got to try out are the Logitech Crayon, the Logitech H390 USB Headset, and the Logitech C270 HD Webcam.

The Logitech Crayon has been around for a few years and many iPad schools already use them. If you are not familiar with it, the Logitech Crayon is a rugged, rechargeable drawing tool for the iPad which, in iPad apps that support it, includes a variable line weight, similar to a "real" pencil. It is built using the Apple Pencil technology. When a student angles the Logitech Crayon down a bit, the line one is drawing gets darker and thicker. Another useful feature of the Logitech Crayon is the "palm rejection" feature which ignores stray screen touches. 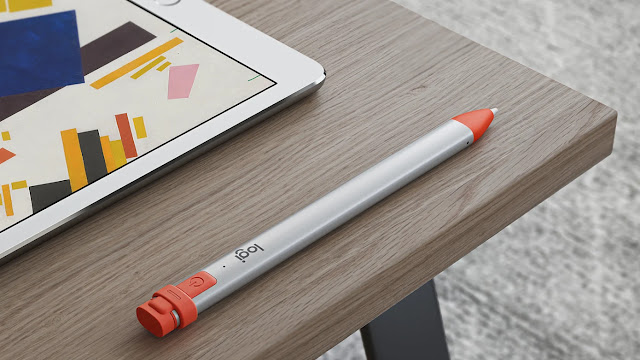 The Logitech Crayon works seamlessly with the iPad. Simply press a button to turn it on and it ready to write with. There are no delays to get started! 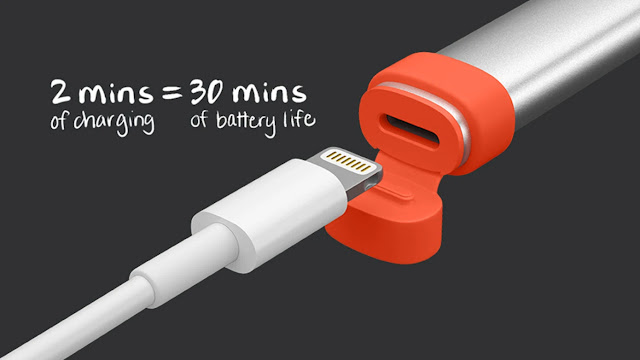 Having a stylus for each student with an iPad is important. We all know using a finger to draw on a tablet screen does not produce good results. With the Logitech Crayon, students can be precise when making a sketch of a science lab result, drawing a prototype of a 3D object they want to design, painting a picture to use in a video or digital story, or even taking notes in their own hand, and, when using a note-taking app like Nebo, Notablity, or Microsoft's OneNote, and convert their handwriting directly into text.
The Logitech Crayon works with many of the apps teachers and students use on the iPad. I happen to use it most with Procreate and Inkflow when I am sketchnoting, since the line weights make a difference in my sketchnote process. Here are a few of many other apps that work with it.

The current iPads that are compatible with the Logitech Crayon include, once they are updated to at least iOS 12.2

One of the big problems with students creating in a classroom is the noise level. Educators have come up with creative solutions to allow students access to a quiet space in which to audio record a podcast, the narration for a digital story, or even have a Zoom or Google Meet video conference.  I have seen large cardboard boxes, lined with foam, and set up so students can record with al least some of the noise of the classroom filtered out. Educators send students into the hallways to record at times. Some classrooms line the walls with commercial acoustic tiles, which are intended to decrease the noise levels. Other ideas include sending the students who need to record to the band room and using one of the practice rooms to record in. Here are some unique set-ups creative teachers have devised!
Julie Smith set-up a portable recording studio in her kindergarten classroom. 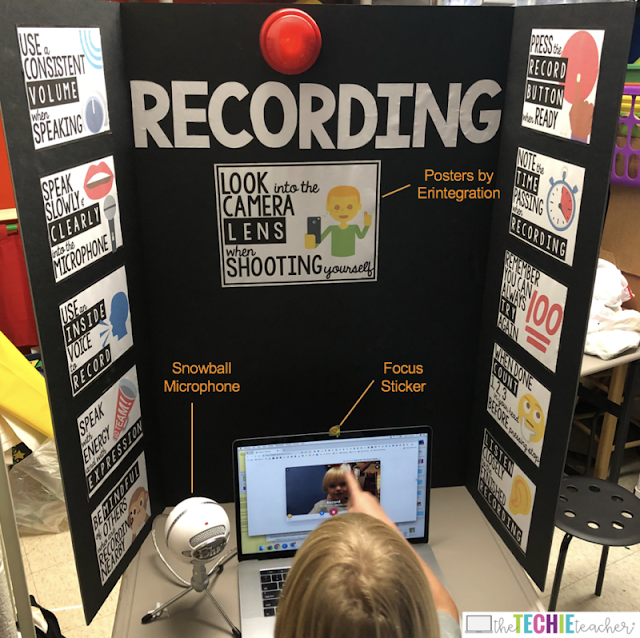 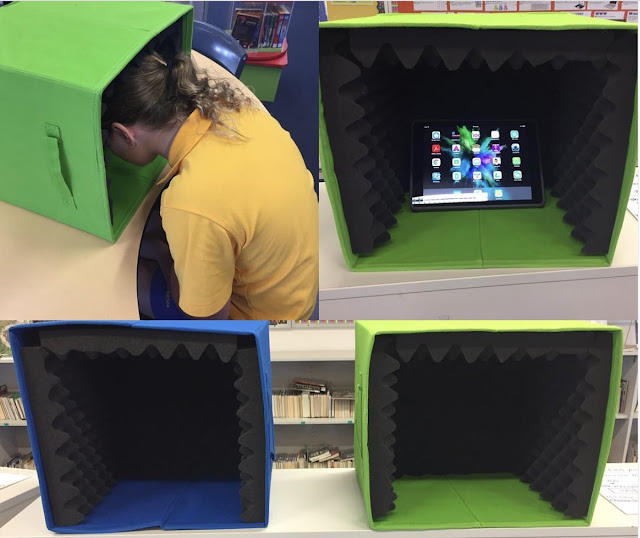 As all educators know, however, there are very few places in a school setting that are quiet. To eliminate most of the educator stress that comes along with trying to facilitate a recording process, a logical solution is having a headset for each student. By having a microphone close to their mouth and the audio being heard through the headphones, students will have the ability to record with little background noise.
I have used Logitech branded headsets for years and still do. Coincidentally, before being asked to review the Logitech H390 USB Headset, I ordered this same headset to use for my recordings and video conferencing use! I chose it because it was an on-ear headset (not over-the-ear) and had a noise cancelling mic. And the sound quality of the Logitech H390 USB Headset is excellent, as you can hear in this recording I made on a Chromebook. I used Vocaroo, the educator's favorite online audio recorder, to create the recording.
Here is the QR code to the recording in case you want to access the recording this way. 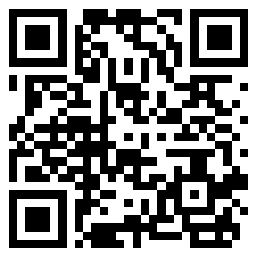 The Logitech H390 USB Headset has a ton of features packed into a very affordable headset for schools. Of course, IMHO, the best feature for the classroom, after the low cost, is the noise-cancelling feature of the boom mic. 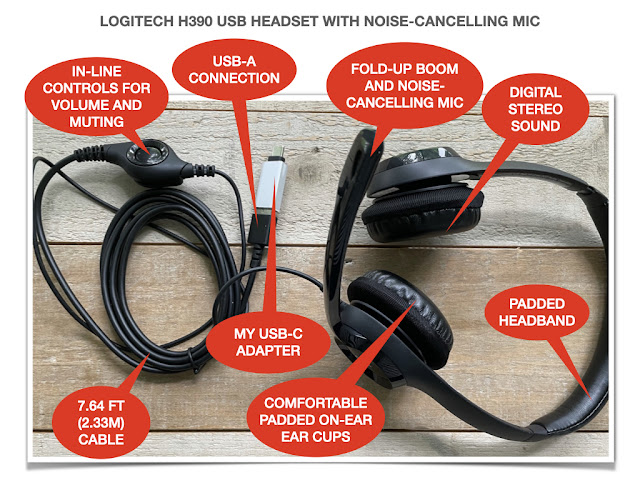 Since I am a Mac user, I do not have any USB-A ports on my MacbookPro M1, only USB-C ports. I use a female USB-A adapter to USB-C adapter so I can plug my Logitech H390 USB Headset into my MBP. By the way, I discovered a long time ago audio is much cleaner with a USB headset connection than the standard 3.5mm headphone jack found on computers.
I also discovered I can use the Logitech H390 USB Headset with that same adapter to record audio with my iPadPro 12.9" (5th generation) since it has a USB-C connection, too! 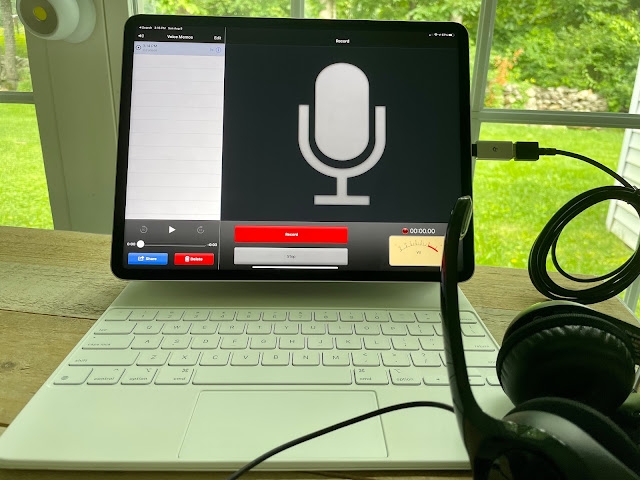 Almost every computer and Chromebook come with a webcam. However, at times, the quality may not be very good. The Logitech C270 HD Webcam strives to solve that problem at a low cost. It is a basic webcam with a built in microphone. It works with Windows computers, Mac computers, Android devices, and Chromebooks and has a USB-A connector. 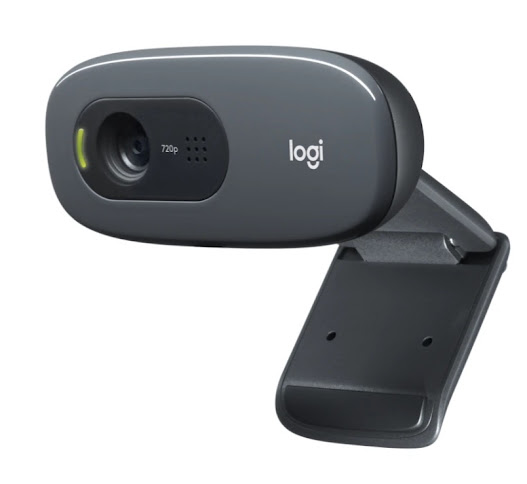 The Logitech C270 HD Webcam has a simple way of attaching to a computer for use. The webcam sits on the top of the laptop or monitor and the adjustable universal clip allows the device to be used with any computer by simply adjusting the moveable component to rest on the back of your monitor. 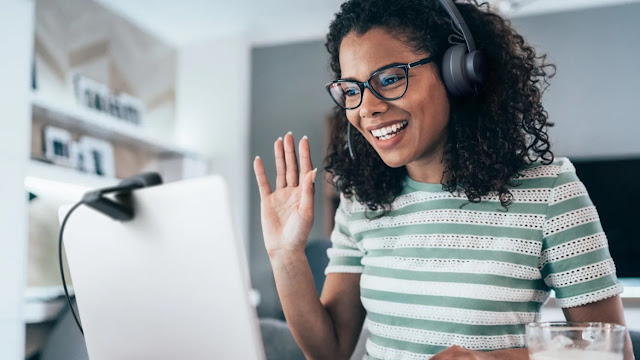 One of the best features of the Logitech C270 HD Webcam for a school setting is the 55° wide angle view of the camera, which makes it easier for two students to create a recording while sitting next to one another and also for taking photos or videos.
The Logitech C270 HD Webcam has a built-in noise-reducing mono microphone, a maximum resolution of 720p and 30 frames per second. and the device has been tested to withstand cleaning and disinfecting between each use. It also has a special feature called "RightLight" which adjusts to various lighting conditions to produce the best look for the speaker.
Here are two photos which compare the Chromebook webcam and the Logitech C270 HD Webcam "RightLight" feature. I took these two screenshots one right after the other.

Using the Chromebook internal webcam and mic
So, take the time to visit the Logitech for Education site and learn more about the Logitech Crayon, the Logitech H390 USB Headset, and the Logitech C270 HD Webcam. These hardware devices can really enhance student creation!
Logitech sent me these three items in return for writing an honest review of the capabilities of them.